One of the few aircraft to capture the attention of serious aviation buffs, casual fans, historians, and everyone else who has held it in their vision if only for a second is the Lockheed Blackbird, alternatively known to its pilots as the Sled. Born out of a requirement for a faster, higher-flying, more survivable replacement for the CIA's U-2, the Blackbird has become an aviation legend. In the spirit of the holidays, this article will detail the locations of Blackbird survivors and depict the locations of those visible in Google Earth. It's Sledding, Google Earth style!

The Blackbird, also known as the Sled, the Habu, the Beast, and the Titanium Goose in its various incarnations, was created to fulfill a CIA requirement for a successor to the U-2. As the U-2 flew deep into the USSR on intelligence gathering sorties, advances in Soviet air defenses were threatening to make the CIA's original high flyer obsolete. Something more survivable was needed, and the result was the Lockheed A-12, designed for high speed and high altitude overflight of denied teritory. As it would turn out, the shootdown of Francis Gary Powers on the first day of May, 1960, ended manned overflight of the USSR. Seemingly an aircraft without a mission, the A-12 evolved into one of the mainstays of USAF Cold War intelligence gathering, the SR-71A, and had a productive intelligence gathering career in its own right.

Out of 13 A-12s built for the CIA, only 8 remain. Two of these airframes, Articles 128 and 132, are currently on display indoors at the Central Intelligence Agency and Battleship Memorial Park in Mobile, Alabama, respectively. The rest of the surviving OXCARTs are on display outdoors and can be seen clearly in Google Earth imagery.

The first prototype of the A-12 family, Article 121, can be seen on display at Blackbird Airpark in Palmdale, California, in company with SR-71A Article 2024 and a D-21 drone: 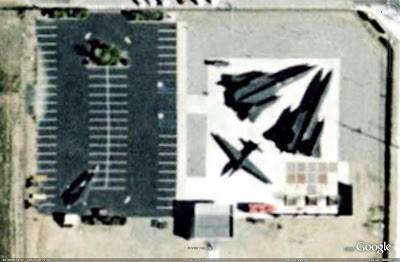 The second A-12, also employed as a flight test airframe and the A-12 used for pole tests of the aircraft's radar cross section, is now on display at the USS Intrepid Sea, Air, and Space museum in New York City. This is the only Blackbird to be displayed on a carrier deck, and doubled as a tee box for Will Smith in the movie I Am Legend.

An image of the USS Intrepid in 2002 can be seen below, followed by an image from 2007 while the carrier was docked at Staten Island undergoing refitting and refurbishment. 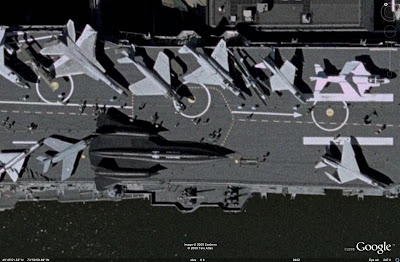 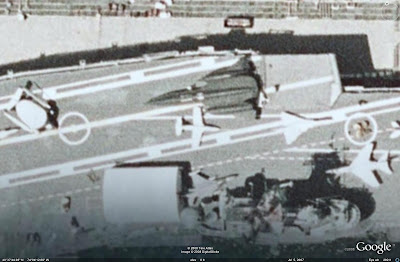 A photograph of Article 122 on the deck of the USS Intrepid can be seen below: 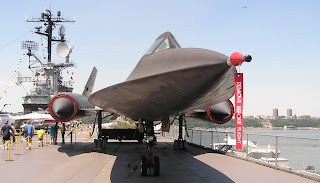 Article 124, the fourth A-12 airframe and the only two-seat trainer, is on display at the California Science Center in Los Angeles. This aircraft, designated AT-12, was nicknamed Titanium Goose and never received the overall black paint scheme found on most other A-12s later in their flying careers. 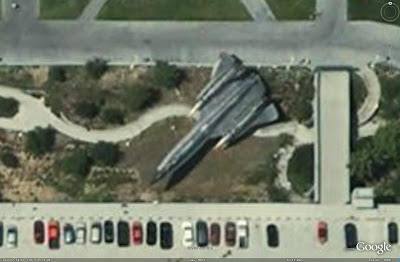 Article 127 is on display at the Marshall Space Flight Center in Hutsville, Alabama. This aircraft is one of three OXCARTs to perform operational reconnaissance sorties out of Kadena AB, Japan. Amusingly, at one point Article 127 featured the characteristic yellow NASA fin stripe on its vertical tail surfaces. Suffice it to say that NASA never operated an A-12, the existance of which remained classified into the 1980's! 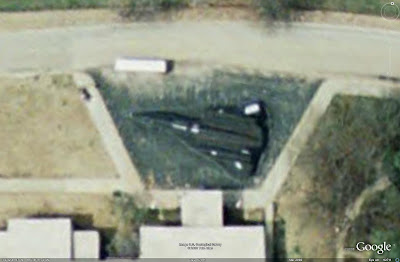 Article 128 was previously displayed at the Minnesota ANG Museum in Minneapolis before being removed for display at the CIA. An image of the aircraft on display outdoors in Minnesota is provided below. 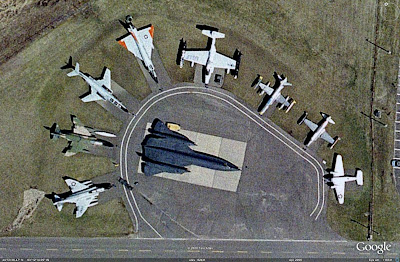 Article 130 is on display in San Diego at the San Diego Aerospace Museum. 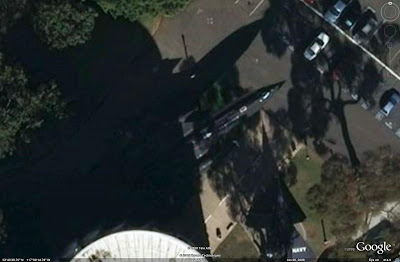 Article 131, the other surviving A-12 to have performed operational reconnaissance sorties (06932, the third aircraft, was lost during a training flight), is currently on display at the Birmingham Museum of Flight in Birmingham, Alabama. With three A-12s on display, Alabama currently possesses more than a third of the surviving OXCART fleet! 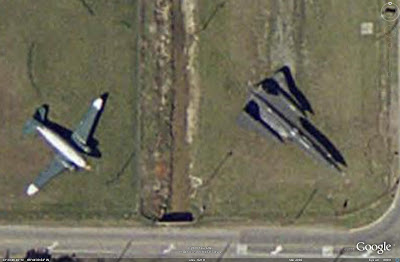 While the A-12 program was progressing, Lockheed realized that the airframe might be suitable for tasks other than reconnaissance. Project KEDLOCK produced an interceptor variant for the USAF, with three prototypes being constructed. The YF-12A prototypes were arguably the most advanced interceptors of their era, featuring long-range pulse-doppler AN/ASG-18 radar sets, and carrying three XAIM-47A air to air missiles.

Three YF-12As were constructed by modifying three A-12 airframes on the production line. These were aircraft 60-6934, 60-6935, and 60-6936, referred to as Articles 1001, 1002, and 1003 respectively. The first and third prototypes were written off in accidents, leaving Article 1002 as the sole survivor of the type. After a career as a flight test aircraft with NASA following the cancellation of the USAF F-12 program, Article 1002 was retired to the USAF Museum at Wright-Patterson AFB in Dayton, Ohio, where it resides to this day. The aircraft is currently situated in the R&D Hangar at the museum's annex facility.

The following photograph depicts the USAF Museum's YF-12A on display: 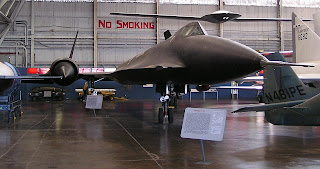 With the cancellation of manned overflights over Soviet territory, Lockheed began developing ideas for continuing a reconnaissance mission over these territories. The result was the M-21, a two-seat version of the A-12 specially configured to carry and launch a D-21 drone mounted above the rear fuselage. Despite being able to claim status as the world's fastest biplane, the M-21/D-21 combination ultimately proved to be unsuccessful, with the D-21 being modified for launch from two specially outfitted B-52H carriers under the SENIOR BOWL program. The two A-12s modified into M-21 standard were Articles 134 and 135.

06941 was lost during the fourth launch attempt of a D-21 drone, an accident which can be seen here. This video is very interesting from a historical standpoint. Apart from depicting a Mach 3 collision between two formerly classified intelligence gathering platforms, the video tears down one of the assumptions made about the D-21. It had been believed due to photographic evidence available that the leading edge probes seen on operational D-21Bs carried by the B-52H launch platforms had been added as part of the D-21B program. This can be seen to be completely untrue, as the D-21 launched from the back of 06941 possesses these same leading edge probes.

The surviving M-21 resides indoors at the Seattle Museum of Flight, complete with a mounted D-21.

A photograph of a D-21 on display at the USAF Museum can be seen below: 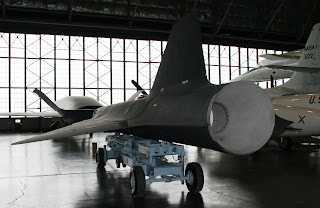 The SR-71A evolved out of the CIA's A-12 to provide the USAF with a twin-seat strategic reconnaissance aircraft capable of carrying multiple sensor fits to gather complex photographic and electronic intelligence. Operational SR-71As were based at Beale AFB in California. Not only did the SR-71A replace the CIA's A-12 at the Kadena AB operating location, but it served at RAF Mildenhall in England, gathering intelligence on Soviet and Warsaw Pact activity in Europe. Mildenhall-based Blackbirds also conducted reconnaissance over Libya in support of Operation ELDORADO CANYON, to cite a specific example of non-Communist directed operations. 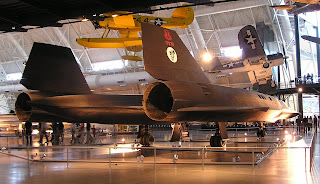 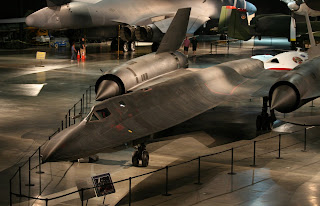 Article 2006 was employed almost exclusively by Lockheed for flight test work supporting USAF SR-71 operations. It operated out of Palmdale, California and is currently on display at the Air Force Flight Test Center Museum at Edwards AFB, California, and can be seen in the image below: 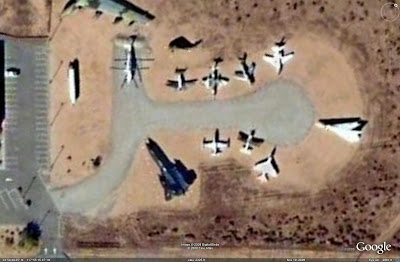 Article 2010 was used between 1975 and 1976 to test the Big Tail modification, featuring an extended tail assembly housing various sensor fits. The aircraft was retired from service following the Big Tail test program and can currently be seen on display at the USAF Armament Museum at Eglin AFB, Florida, complete with Big Tail assembly. An image of the aircraft on display is provided below. Note that the extended tail fitting can clearly be seen. 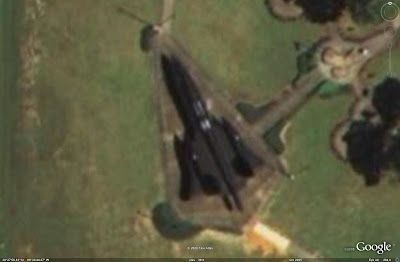 Article 2011 is on display at the Castle Air Museum at Castle AFB, California. 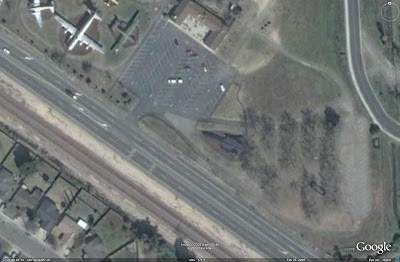 Article 2014 is on display at Beale AFB, California, in company with a D-21 drone. The aircraft is mounted on a replica of one of the patches worn by SR-71 crewmembers. 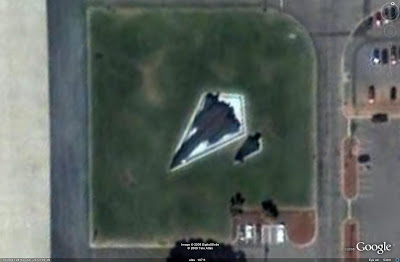 Article 2018 is on display at Barksdale AFB, Louisiana but is not currently visible in Google Earth imagery. It is, however, visible in Microsoft Virtual Earth, as seen below: 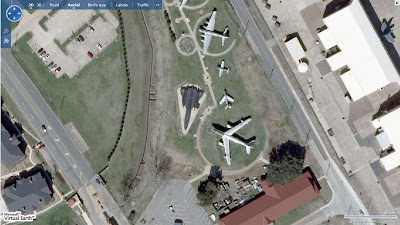 Article 2019 is on display at the Virginia Aviation Museum, Richmond, Virginia. 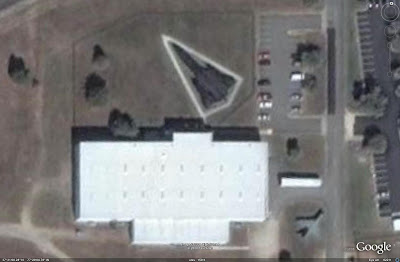 A photograph of Article 2019 on display can be seen below: 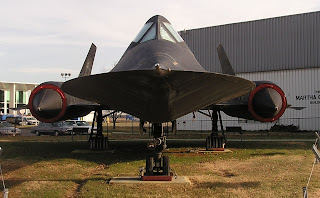 Article 2024 can be seen on display at Blackbird Airpark as mentioned previously.

Article 2026 is on display at the March Field Air Museum, March AFB, California. 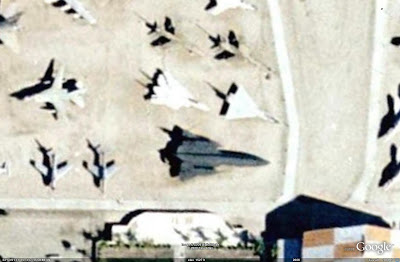 Article 2030 is on display at Heritage Field, Lackland AFB, Texas. 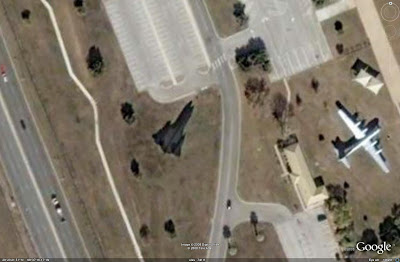 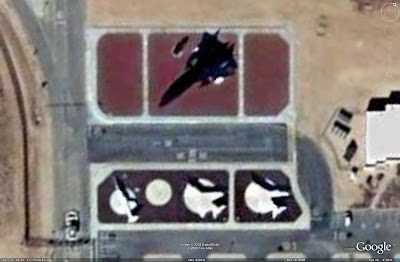 Three aircraft formerly involved with the Blackbird program in some capacity still exist today, and one can be seen in overhead imagery. The two B-52Hs modified to support D-21B drone launches, 60-0036 and 61-0021, are still in use. The former aircraft serves at the USAF flight test facility at Edwards AFB, while the latter is in operational service at Barksdale AFB, Louisiana. A B-58 Hustler was modified to serve as a test aircraft for the AN/ASG-18 and AIM-47 combination used by the YF-12A. This aircraft was originally supporting the F-108 program, the aircraft for which the weapon systems originated before it was cancelled. This B-58, 55-665, was nicknamed Snoopy due to its long, drooping radome fitted for the AN/ASG-18. It currently resides on the range at Edwards AFB as a photographic target and can be seen in the image below: 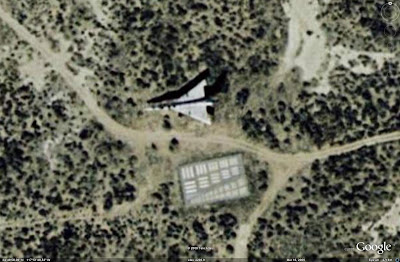 I hope everyone has enjoyed this "holiday-themed" aviation topic. The Blackbird is one of the most interesting aircraft to ever exist, and more information on CIA A-12 operations is declassified each year, ensuring that the complete story has yet to be written. In the meantime, take note of the locations of these high performance aircraft, and take the time to go see one close to you if possible. You won't be disappointed!

Hi SOC!
Thanks for this comprehensive and GE-related overview!
Do you have any coordinates for those birds lost in accidents over the US?
Cheers from rambo54

I saw the blackbird in Tucson last summer, it's a very nice and impressive aircarft. It is certainly worth a visit!
ChristianNL

Coordinates for aircraft lost in accidents is an interesting idea, I might look into that after the first of the year.

It's my favourite aircraft :o)

Very nice job Sean O'Conner.
I like your idea of getting coordinates for the lost SR-71's.

An update for the SR-71, 617963 at Beale AFB. Its been relocated from the flightline to the main section of the base near the Exchange building. The D-21 is supposed to be parked next to it soon but sits in an area near the old tanker ramp.

As far I know one Blackbird and its crew are still missing.