If It Bleeds, We Can Map It

Overhead imagery can be useful for all sorts of analysis work, but it can also be used for purely amusing pursuits. Earlier today I went and saw Predators, the new movie featuring everyone's favorite chameleonic aliens. The movie, which was awesome, got me thinking: I know Predator (the 1987 original) was shot in Mexico, I wonder if I can find the sets in Google Earth?

The easiest site to locate is the guerilla base that Schwarzenegger and his commandos obliterate. It turns out that the old set has been largely retained and is now a museum and restaurant dedicated to the movie. As far as I'm concerned, this means that everyone on the planet now has a reason to go visit Mexico! The site is located south of Puerto Vallarta on Mexico's western coastline, a few miles into the jungle near Mismaloya, and can be seen in the image below: 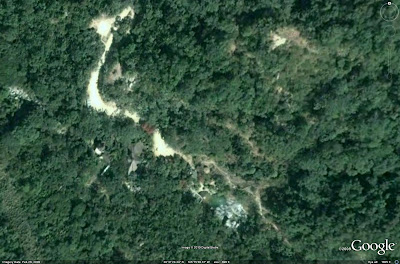 Two different waterfalls were used in the movie. One of them, Misol-Ha, depicted where Schwarzenegger (ok, his stunt double, who actually messed up his leg doing the scene) fell off of the cliff into the water trying to get away from the Predator. The other one, Agua Azul, was where the Governator fell over a few small falls and crawled out of the water covered in mud. Both sites are located near Palenque in eastern Mexico. They aren't visible in high resolution in Google Earth, so a general overview is provided in the image below: 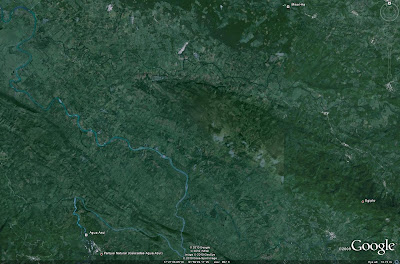 The last location isn't a set, but it is related to the movie. This is one of the fun things that Blu-Ray lets you figure out when you have way too much time on your hands. In the opening scene of the movie, Schwarzenegger, Carl Weathers, and R.G. Armstrong are discussing where the helicopter was shot down carrying the guys Schwarzenegger's commandos are being sent in to rescue. Armstrong points to a map of the location, and if you pause the movie on Blu-Ray you can make out what the map says. It turns out that it's actually a real navigation chart...but it's pointing to a location in Brazil, one that's not even close to any border the helo was supposed to have crossed! Check out the image below to see what's actually at the coordinates indicated on the map, and notice the total lack of jungle foliage in the area: 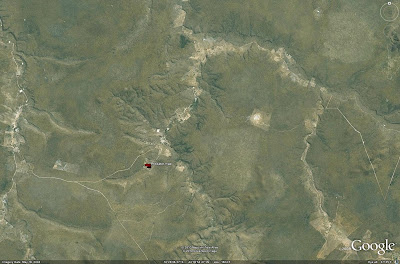 This amusing exercise just goes to show how much fun you can have when you stop being serious with Google Earth. SAM sites? Bah. Finding the set locations of the greatest movie of all time is way more entertaining! Check out the location of the Predator set near Puerto Vallarta in Google Earth and bring up the Panoramio Photos of the area to see some of the fun leftovers from the film. There are a ton of good Panoramio Photos showing the waterfalls as well.

Predator is one of the best guy movies ever made.

Yes, GE can be fun when we watch stuff like this.