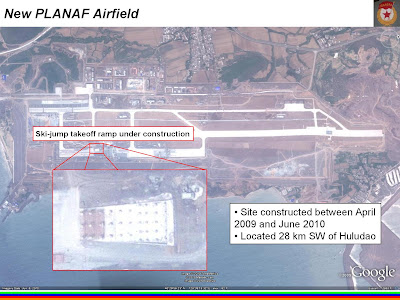 The image above depicts a new airfield located 28 kilometers southwest of Huludao in northeastern China. This airfield was constructed between April 2009 and June of 2010. The June 2010 imagery shown indicates that many of the structures and airstrips are still being completed, but the overall layout of the airfield is in place.

This airfield is likely a PLAN facility, and may represent the first facility destined to house the PLAN's J-15 carrier-based fighter. The J-15 is a Chinese-produced Su-27K (FLANKER-D) derivative. Photographs of the first prototype currently undergoing flight tests indicate that the aircraft is a derivative of the Chinese-produced J-11B, a modified Su-27SK featuring Chinese avionics, weapons and engines. The J-15 features the canard foreplanes and short tail sting of the Russian Su-27K, but possesses the modified radome and modified wingtip missile rails only found on the J-11B. At this time the J-15 prototype apepars to retain Russian Al-31F engines, but may be fitted with the indigenous WS10 in the future. Alternatively, as the Al-31F is a proven naval aviation powerplant, production J-15s may retain this engine.

Carrier aviation affiliation is denoted by the presence of what appears to be a ski-jump takeoff ramp, similar to that seen at Xian, being constructed adjacent to the main runway. Another potential naval-related feature is a possible mock landing area located near the north end of the main runway. Such a feature allows carrier pilots to practice mock approaches while operating from land. What appear to be foundations for 24 individual aircraft shelters may provide a glimpse into the size of a PLAN J-15 unit, suggesting that an operational airwing may be composed of either 12 or 24 fighters.

Constructing this airfield in the northeast may suggest that Huludao will be fabricating the PLAN's indigenous aircraft carrier. Another option is that the base provides access to the sheltered waters of the Bohai Gulf for overwater training flights, allowing the airwing to be produced and worked-up prior to an eventual training deployment on the refurbished Varyag. Varyag has recently left the dock at Dalian and is possibly in the final stages of outfitting prior to beginning sea trials for the PLAN. Given the amount of work that visibly remaisn to be completed on the Varyag, sea trials are likely no earlier than sometime in late 2011.

The location of the base indicates that the assigned aircraft, should this represent an operational unit, will be assigned to the North Sea Fleet. This would seem to indicate that either the Varyag or a Chinese-produced aircraft carrier will also serve in the North Sea Fleet. The limited amount of aircraft shelters being constructed also indicates that the PLAN is not following the USN model, whereby few large airbases host various carrier aviation units. This suggests that if more than 24 J-15s are to be produced to equip carrier air wings, they will be based at a different location. Identifying the locations where these bases are constructed will provide further insight into China's plans for its carrier force, such as which fleets the vessels will serve with.

A further possibility is that PLAN flight testing is simply being separated from the activity at Xian. In the near future Xian will be testing a new transport aircraft, the XXJ fifth-generation fighter, various UAVs, and other aircraft types. Separating test and training activity for the PLAN to a new facility would serve to alleviate some of the potential crowding at Xian which may occur. Were this to be the case, then the previously mentioned assertions as to the basing, airwing size, etc would no longer be valid.

As China's naval aviation force expands into carrier-based aviation, the identification of facilities such as this will become important in deriving the changing intentions and force strengths of the PLAN. IMINT & Analysis will continue to monitor these locations with a goal of deriving any useful information.

Might be another wire trap in the southern end of the same runway, since the construction isn't along the runway, but across it....

So in summary so far:

Another interesting point is that the location of this ramp would put the aircraft and pilot over water within a matter of seconds of leaving the end of the ramp....I suspect that was a conscious decision.

RAJ47 is absolutely correct about the second ramp, the same area there is considerable ongoing construction, including what appear to be a number of buildings.

Historical construction appears to have started not long before the April 09 imagery was taken (you can see work just starting then) and this is clearly a massive investment and there is a lot of ongoing work.

I would like to write that I enjoy reading Your blog