In July of 2010, various media reports indicated that Russia was completing a sale of S-300PMU-2 Favorit (SA-20B GARGOYLE) SAM systems to Azerbaijan.  Something of an uproar ensued, with Russia and Azerbaijan denying the sale and Armenia expressing its displeasure.  Then, in June of 2011, two S-300PMU-2 TELs appeared in an Azeri military parade in Baku.  Clearly the sale had gone through, despite the denials from all parties involved.

Now, following an imagery update in May of 2013, the location of Azerbaijan's Favorit SAM systems can be disclosed.  Sited on the coastline northwest of Sumgait, the Favorit batteries appear sited to defend the capital area.  The 200 kilometer range of the Favorit's 48N6E2 (GARGOYLE mod 1) interceptor also provides the system with a degree of capability over western Azerbaijan, although the Nagorno-Karabakh region remains just out of reach. 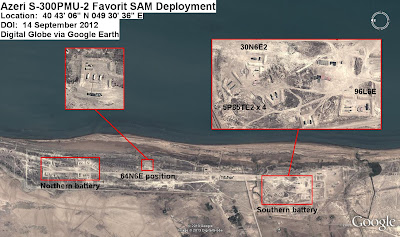 The southern site is emplaced on a reprofiled former S-75 (SA-2 GUIDELINE) position, with the northern site emplaced on a newly built semi-hardened position.  The site buildup suggests a permanent deployment location.  However, the mobility of the S-300PMU-2 allows it to redeploy in a very short period of time.

The S-300PMU-2 represents the most advanced SAM system in the region, and is easily the most capable air defense system in the Azerbaijani inventory.  The 200 kilometer engagement range is supported by 300 kilometer range surveillance and tracking capability from the associated 64N6E2 and 96L6E radars, systems capable of monitoring the bulk of both Azerbaijan and Nagorno-Karabakh.  The six target engagement capability of the system, effectively doubled by deploying two batteries, effectively negates any aerial threat posed by the Armenian military.  Furthermore, the ATBM capability of the system removes Soviet-era SCUD missiles from the threat picture.

With the deployment of the S-300PMU-2, Azerbaijan has taken a significant step to upgrading its air defense capability.  The ability of the Favorit, coupled with the state of the Armenian military, significantly reduces the threat of an armed conflict between the two nations in the future, or at the very least enables Azerbaijan to remove the Armenian air and missile threat from the equation.
Posted by Sean O'Connor at 15:47

Hi SOC! Good to have you back!
There seems to be S-300 activities in Algeria
36.728270° 2.948230°
36.769873° 3.364780°
The sites apparently being fortified with some underground installations and overhead shields hiding each launcher position from aerial or space observation
Cheers

Do you think, that leaving Nagorno-Karabakh Airspace out of the engagement envelope was a decision made to display complaisancy in regard to peace talks etc.?

I don't think it really matters. Move one battery a bit to the west and they've got it covered. Hell, move it closer to the N-K border and they can range a good bit of Armenia as well.

If they really wanted to be cute they could drop one down in Nakhchivan. Put one in the northwestern end and they could cover all of Armenia and N-K.

Regarding the Algerian sites, I keep forgetting to change those in the SAM Site Overview to S-300P complexes!

What you think about this?http://www.eurasianet.org/node/67062 If a war begins between Azerbaijan & Armenia these missiles will be useful for Azeris? Because, for sure Russia will support Armenia and Russians will jam Favorits

Russia has varying levels of relationships with both sides, so I'd think they'd rather serve as a moderator to avoid a conflict rather than take sides in a shooting war.

For the various comments from above. Firstly, Russia won't be declining any arms sales to Azerbaijan, money in there piggy bank is worth more than Armenia's offensive, defensive capabilities. Though a resumption of hostility still depends on the major powers. A level of balance will always needs to be kept on both sides, from all superpowers. And Armenia's balance is kept from Russia's role, not necessarily Russia's involvement. (big difference)

Russia jamming Favorits is unlikely, I don't think even Russia would like to see Oilfields destroyed as many geopolitical agreements with the West can be lost in favor to them in the event of Armenia launching ballistic missiles to Baku.Perhaps the easy reasoning to sell equipment to Azerbaijan. (Winning over deals with West)

On a air defense note, Azerbaijan also has Buk-M1 and Pechora 2M in there inventory these can be used closer to the Nagorno Karabagh border leaving the Favorit to protect Oilfields and City in the event of a larger theatre of war.

I am looking for the Buk and Pechora systems, perhaps Sean would have better luck spotting there location...

Good to have you back Sean!