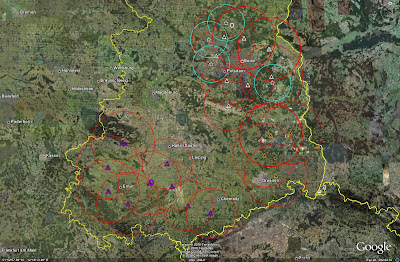 The 31st FRR covered the southeastern portion of the DDR, as seen in the image below: 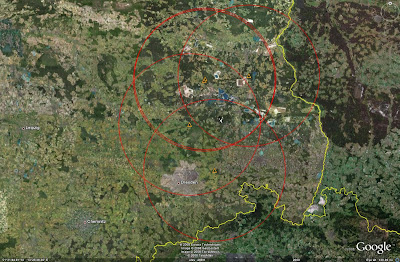 The 41st FRBr covered the capital area surrounding Berlin, as seen in the following image. The four reserve S-75 sites were located along the southwestern portion of the 41st FRBr's area of responsibility. 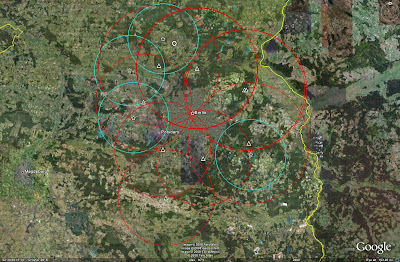 The 51st FRBr covered the DDR's southwestern flank, as seen in the following image. The four reserve S-75 sites were located in the eastern portion of the 51st FRBr's area of responsibility, along a north-south diagonal stretching from Halle to Chemnitz. 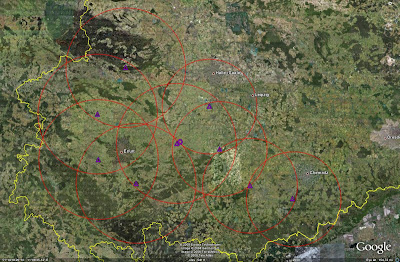 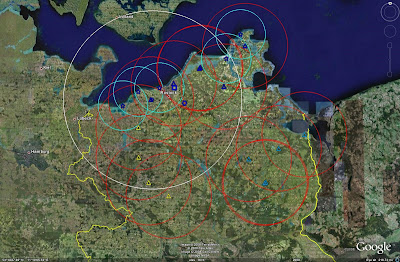 The 13th FRR covered the northwestern portion of the DDR, as seen in the image below: 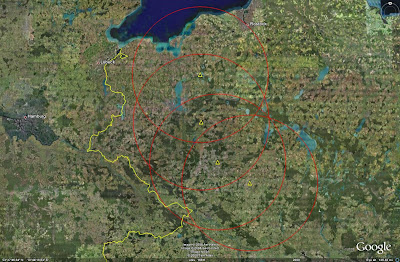 The 23rd FRR covered the northeastern portion of the DDR near the Polish border, as seen in the image below: 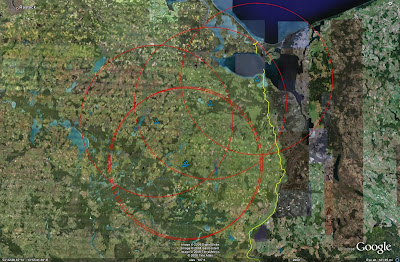 The 43rd FRBr covered the northern area of the DDR between the 13th FRR and 23rd FRR areas of responsibility, as seen in the image below: 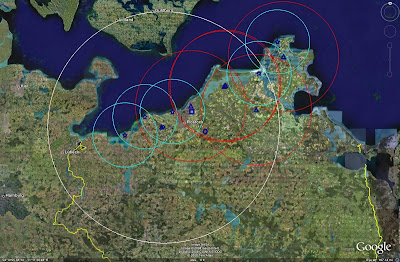 As was the case with many of the Warsaw Pact member states, there was a significant Soviet presence in the DDR. This presence included a number of strategic air defense units. These air defense units defended both DDR airspace, providing coverage not present under the 1st and 3rd LVD, and Soviet military facilities, including airfields home to Soviet combat aircraft. Identified Soviet air defense assets in the DDR included two S-75M sites, 24 S-125M1 sites, and one S-200M site. These Soviet air defense sites were concentrated in the 1st LVD's area of responsibility.

Soviet air defense coverage in the DDR can be seen in the image below: 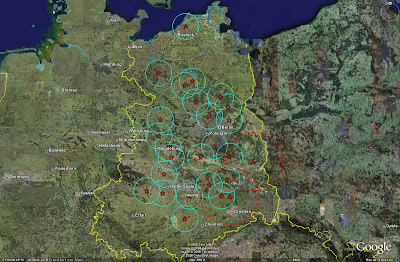 Various Soviet tactical SAM units were also present in the DDR. These systems included the Krug, Osa, 9K37 Buk (SA-11 GADFLY) and S-300V (SA-12 GLADIATOR/GIANT). As tactical SAM units would have been tasked to provide mobile air defense for Soviet Army units pushing into NATO, they are not covered here.

Long-range air defense of the DDR was provided by four S-200 sites. As previously mentioned, one of these sites was a Soviet-controlled battery located east of Madgeburg. These four S-200 batteries not only provided coverage over the entire DDR, but also provided significant cross-border coverage to the north and east, potentially allowing targets to be engaged before crossing into DDR airspace. S-200 effectiveness was reduced at low altitude, but the system still posed a serious threat to medium-high altitude aircraft, in particular nonmaneuverable aircraft such as ISR platforms. After an outbreak of hostilities, the S-200 batteries would be well suited to deny NATO reconnaissance aircraft from operating in close proximity to the DDR border.

The coverage provided by the four S-200 series batteries located in the DDR can be seen in the image below: 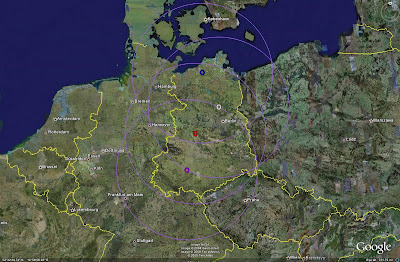 The six DDR air defense units within the 1st and 3rd LVDs, when combined with the Soviet air defense units in country, provided an overlapping air defense network to defend DDR airspace. The image below illustrates the locations of all of the DDR and Soviet strategic SAM sites, tactical SAM garrisons, and training sites, the latter of which are brown in color: 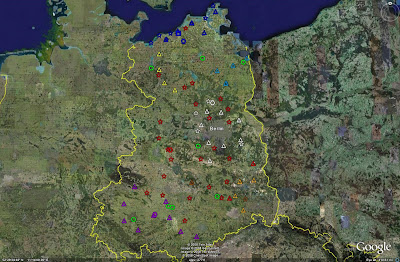 The overall coverage provided by the entire air defense network can be seen in the image below: 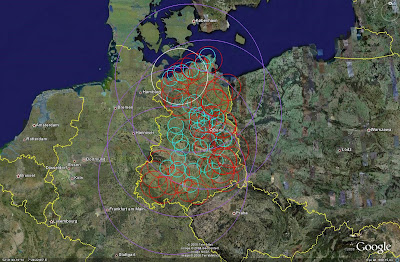 The deployment strategies employed by the DDR and Soviet units indicate a desire to defend both key border areas as well as major residential and industrial areas. During a postulated Soviet conflict with NATO, Soviet and Warsaw Pact units advancing into Western Europe would likely have contained organic tactical air defense units. The volume of strategic air defense units present in the DDR would suggest that the Soviets placed a great deal of importance on defending the major logistical support areas and lines of communication in the DDR. This meshes well with the Soviet concept of rapid advance of armored units into enemy territory. In order for these advances to be successful, the logistics support train must be well defended.

One of the primary limitations of the DDR was the lack of suitable modern air defense systems during the latter stages of the Cold War. The main drawback of the most numerous strategic SAM systems in service with the DDR was the inability of each battery to prosecute multiple targets. The only system capable of a multiple target engagement capability was the S-200, and this could only be achieved by deploying multiple 5N62 (SQUARE PAIR) engagement radars at each location. The S-200 would typically employ one 5N62 for each 6 launcher cluster present at the site. That being said, this lack of serious multiple target engagement capability, coupled with Western advances in ECM and SEAD/DEAD tactics and weapons, threatened to make the DDR's air defense network virtually obsolete. 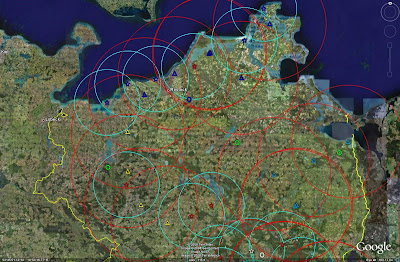 Eliminating the 14th FRR's northern three S-75 sites and a solitary Soviet S-125 site provides the beginning of an undefended corridor of airspace for striking at targets in the region, as illustrated below: 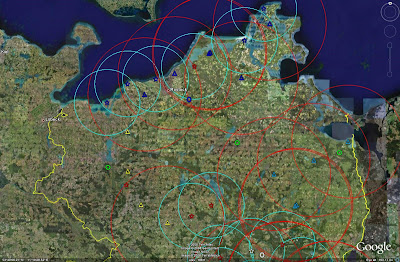 There is a tactical SAM garrison in the area opened by the postulated strike, but this was an Osa garrison. Operation DESERT STORM proved that the Osa was ineffective at dealing with fast jets backed by EW, SEAD and DEAD assets, recording no successes against Coalition aircraft. Ergo, the strike package would likely not be threatened by the Osa TELARs in the area, being able to proceed deeper into the DDR. A turn to the south reveals another narrow corridor leading to the 1st LVD's area of responsibility being vulnerable were a second Soviet S-125 battery to be destroyed. Clearly, newer air defense systems were necessary to deal with the increased threat posed by NATO strike aircraft and their support assets.

The answer came in 1989 when the first S-300PMU battery entered operational service. Site preparation had begun in 1984 near Retschow in the 43rd FRBr, and system operators were trained in the USSR between August and December of 1988. Superimposing the S-300PMU's range ring over the corridor generated by the postulated strike package, it can be seen that the system was capable of defending the vulnerable area in the northwest. 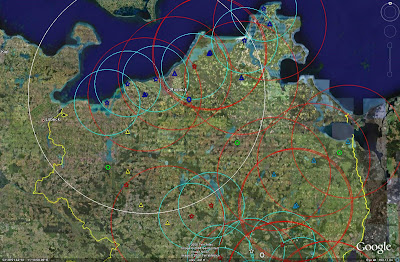 The exact location of the DDR's S-300PMU site has not been determined with complete certainty, but it is known that the system supplemented, if not replaced outright, the Retschow S-75 battery in the 43rd FRBr. Given this location and the fact that the Retschow S-75 site remains unmodified, the following site stands out as a potential location for the S-300PMU battery: 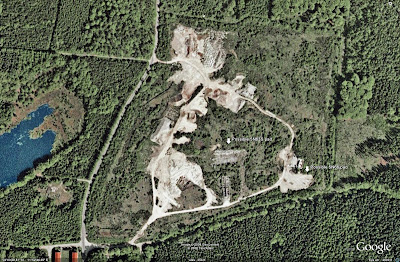 It is known that Soviet engineers did travel to the DDR to construct S-300P series SAM sites, suggesting that they were responsible for constructing the Retschow site. This would suggest that the above location is a distinct possibility as it has clearly undergone significant deconstruction, potentially erasing evidence of built up revetments and radar platforms. The Soviet engineers may also have constructed Soviet S-300P series sites as well, and the following image presents an example from the 51FRBr where such a site may have been constructed adjacent to a DDR S-75 site: 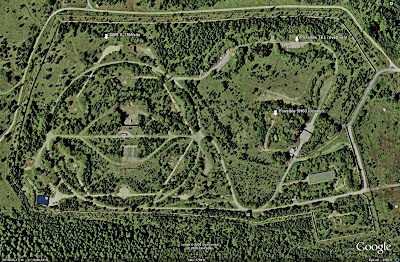 Had the Cold War continued, modernization of DDR air defenses would have necessitated priority status within the USSR and the Warsaw Pact. Aging systems, proving to be more and more unreliable against modern combat aircraft, would likely have been supplemented and replaced by further S-300P series SAM systems in both the DDR and Soviet inventories. Only then would the air defense network of the DDR have been able to be relied upon to forestall any significant action by NATO.

A minor nitpick: In wartime, the air defence network would be supplemented by the AD elements of the ground forces of the DDR and the SGFG. These comprised of (excluding SHORADS) a large number of SA-4 (army AD) and SA-6 (division AD) mobile batteires, plus a smaller number of SA-11s (replacement for SA-4) plus a single SA-12A battalion in Madgeburg from 1987/88 on. These would be supported by numerous mobile AD radars (typical types: Long Track, Flat Face).

It was expected that the mobile AD elements, in addition to providing organic coverage to the ground forces, would also be shuffled around as necessary to fill-in gaps crated by NATO SEAD/DEAD efforts.

can you include the army s300v and buk/kub/krug sites to your ad maps? this is b/c those systems would have been operating in iads with strategic sam and suplement it. howether they were (and still are) mobile systems so they will mostlikely move to the weak areas. you could only provide staging areas though as that is where they will be in the first day of war