Missile system engagement ranges are arbitrary figures. They represent the maximum range that a given SAM system can engage a target. They are not, however, fully representative of the missile's overall engagement envelope.

There are two factors which will limit a SAM system's engagement range: terrain and the radar horizon. Both of these limitations can limit the SAM system's engagement range at a given altitude. While terrain constraints can be limited by deployment strategies and by using mast-mounted or elevated radar systems, the radar horizon is always present.

When the radar horizon values for a given radar are combined with the maximum and minimum engagement ranges and altitude figures for an associated SAM system, the true engagement envelope of that SAM system becomes clear. To illustrate this point, consider the S-300PM (SA-20B GARGOYLE) SAM system equipped with the 48N6D missile.

The S-300PM/48N6D combination possesses the following capabilities:
-Engagement range: from 3 to 200 kilometers
-Engagement altitude: from 10 to 27,000 meters

Postulating that the engagement radar is mounted at sea level, the radar horizon for 10 meters altitude, the minimum altitude at which the system can engage a target, is set at approximately 13 kilometers downrange from the radar set. Extrapolating this data indicates that a target must be at an altitude of no less than 2,352 meters (7717 feet) to be detected and engaged at the system's maximum range of 200 kilometers. When placed atop the 23.8 meter 40V6 mast assembly, the radar horizon at the minimum engagement altitude is set at approximately 33 kilometers, increasing to 39 kilometers if the taller 38.8 meter 40V6M mast assembly is employed. When the 40V6 or 40V6M are employed, the radar minimum engagement altitudes at maximum engagement range decrease to 1903 and 1787 meters (6243 and 5863 feet), respectively.

What this demonstrates is that the minimum altitude figure for a long-range SAM system is dependent upon the height of the emitter in conjunction with the radar horizon. Displaying the above information graphically provides an accurate estimation of the S-300PM's true engagement capabilities, illustrating the true minimum altitudes at which the system can engage a target across its entire engagement range: 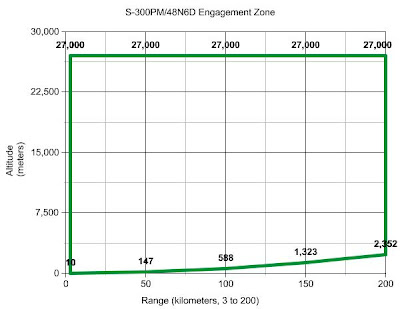 The same graphic is provided below using Imperial measurements: 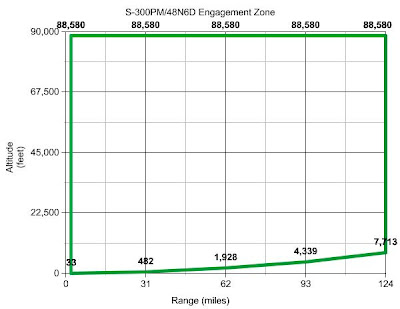 The graphics provided above are based on the data for the system when placed at sea level. Any measures taken to increase the height of the emitter, either by placing the engagement radar on a mast assembly or by siting it at higher altitude, will increase the radar horizon value for the minumum engagement altitude. To illustrate this point, consider the example of the Kaliningrad Oblast's five S-300PS batteries.

The five engagement radars are deployed with the following parameters:

The following image depicts the engagement zones of the Kaliningrad Oblast's S-300PS batteries against targets at 25 meters altitude: 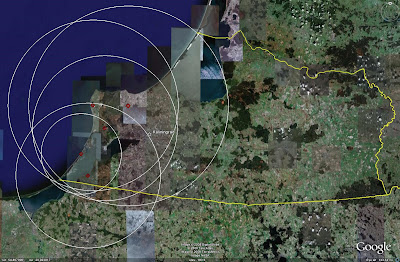 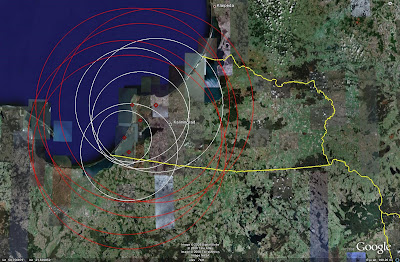 Understanging the affect of the radar horizon on a given SAM system is an integral part of comprehending the true effectiveness of that SAM system. Such understanding allows the analyst to determine blind zones in the engagement envelope where low altitude platforms may operate without fear of being engaged. Proper exploitation of these blind zones could impart a significant tactical advantage during an aerial campaign, highlighting the importance of a complete understanding of a SAM system's engagement capabilities across its entire range spectrum.

Say... this stuff sounds familiar... Thanks for another great post!

Just to make sure I understand the situation... when "altitude" is used, we're really talking about height above the antenna, right? For example, for a radar located at a ground site 1000 feet above sea level and then installed on a 100 foot mast, looking at a target at 2000 feet above sea level, the horizon calculations should be based on a "target altitude" of 900 feet?