As we are all aware by now, UN-backed military action is being taken against Libya. As predicted earlier, the opening salvo consisted primarily of cruise missile strikes against the air defense network, opening the door for allied aircraft to operate over Libya in a lower threat environment.

In an amusing development, here's CNN's John King saying pretty much the exact same thing I did once he gets around to talking about the air defenses: VIDEO Readers have already noted that the range rings and color schemes used to identify Libyan SAM sites are the same ones I used in the SAM Site Overview! It appears that my SAM Site Overview file is now a CNN media source, they even used the native system designators that I do rather than the more common Westernised names usually found in the Western press and media when dealing with Soviet-era systems. My attempts to control the world are clearly moving ahead as planned. Seriously, if anyone else notices something like this, let me know. I do track stuff like this, in part to make my resume more amusing and in part because it adds credibility when I am asked to provide organizations with information.

In an unrelated note, who knows of a good graphing program? I want to make a graph showing SAM system engagement envelopes similar to the HQ-2 graph done here that I used a while back: 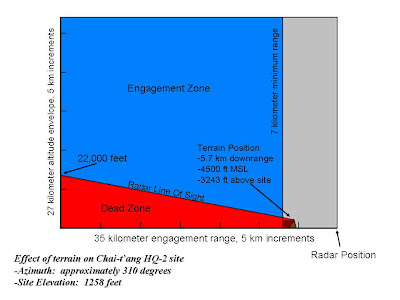 What I want to do (ignoring the text bits) is show the engagement zone as an area graph, but be able to overlay multiple zones on top of each other. Picture the blue part of the above HQ-2 zone overlaid on top of a different colored HQ-9 zone, for instance, showing the disparity in capabilities. Using a graphing or charting application will allow me to do this in much less time than having to draw the entire thing manually, which is what I did for the HQ-2 graph. Either MS Excel is not cooperating, or I have no clue what I'm doing. Either one is possible. So if you have an idea of a program that I can use to graph areas like that, with set minimum and mazimum values in the X (range) and Y (altitude) axes, let me know. Just don't bring up gnuplot; I tried that one and it made my programming-illiterate brain hurt.
Posted by Sean O'Connor at 00:14

congratulations Sean! I also found it amusing that the person who found the file didn't bother to read that that image was for ALL of Libya according to last years analysis. Had they read a bit they'd know that the east is not part of the current equation. journalists....
are you going to lodge a complaint?
btw you did have a copyright on the image...

Nothing to complain about, I just find it amusing that I got press! Sort of. I have no copyright on the images anyway unless I actually make them from scratch, like the ones yesterday. Otherwise, the imagery copyright remaisn with Google and the original provider, like Digital Globe.

One thing funny with the CNN image is that they include my range rings from down south and ignore them in the video as they're partially hidden under some of the overlays.

You may want to invest some time to learn Inkscape, a general purpose vector drawing application.

It features support for vetor graphics, multi-layer, transparancy and is free as freedom of the speach ;)

Sean - if you add range rings and lots of other info to a Google map image, then it is a derivative work and not just Google's sole copyright.

Given the amount of effort and detail you put into your maps, I think you can easily claim copyright over them. As long as you follow Google's license and acknowledge that you got the base image from them, that's perfectly fine.

It's no different than writing a paper and citing sources - just because you pull info from different places doesn't mean you don't have copyright over the final product.

I would suggest you look into licensing your work under Creative Commons. They have a license that allows for redistribution and non-commercial use without asking you for permission, as long as they cite you.

Although by their nature they can not be statically plotted, you might make some mention of the SA-6, Crotale, and SA-8 (no confirmation if in inventory).

We look forward to an early Geoeye - Digital Globe update(s) directly released or via Google Earth to undertake an open source BDA.

From media sources, images appear to indicate 122mm SP artillery was struck along with a bunch of other vehicles. U.S. fighters and B-2 bombers are alleged to have participated in early AM sorties. Wonder if SFW were employed?

The problem that Inkscape or GIMP have is that I still have to generate the X and Y axis to make a graph. That in and of itself might not sound like much, but it gets to be time consuming when trying to evenly space all the little tick marks.

Believe im from Brazilian Army, and your "analysis" about Libia is be using by army (italy,france,uk,usa) past weeks and days. A diplomatic source tell me Sorry for my english...

Another import thing it the USA and UK are using some "fakes" anti radar tactial againts chinas.. Believe this "war" are very important to USA and UK to learn about chinese army force equipaments..

This war is not only about rebels, Believe China is very very very angry. China's system defence are been tested

I think you put too much time and effort for CNN or some one else just to use your work. I would at least ask them to acknowledge or cite your name on the pictures used or something like that.I don't know how much you want to take time to "fight" them or hire an attorney but I think you should at least contact them and explain yourself. Who knows? you might find yourself on TV as intelligence expert.

I'd do the graphic in CorelDraw. What you need is basically any vector graphics program, I guess there's at least one free one around.
OpenOffice 3.1 Draw would probably suffice already, and it's for free.

The diagram elements can easily be created with Excel or OpenOffice Calc and be copied and pasted as background into the vector graphics program.

Sean, the Spanish newspaper El Mundo is quoting you as the source of their infography too

I too saw CNN literally copying everything you put in your posts. I find it very amusing. Typical of the clueless media when it comes to the military! I enjoy reading your blog, I am a former US Army LRSD man.

I would also advise you to copyright what you're doing. The media will take your creations and use them as they please until you knock on their door with legal paperwork...take it from me I'm a graphic designer!!

Congratulations from Spain for such a great job.

It's amusing to find the material you provide for free in your own blog copied by the media and then realise they didn't have a clue about what they are talking about.

I find it amusing when zvezda (red star) chanel gets things wrong. But they seamed to make their own grafics on the same subject.

You might want to take a look at ggplot2: http://had.co.nz/ggplot2/, a generic toolset for producing high-quality plots, including area plots as well as maps. I'm no expert in the tool, but there's a mailing list there which might be helpful if you ask for help.

I played with Gnuplot a little bit... It could be cleaned up and parametrized a little bit more, but it basically draws the same image: http://pastebin.com/tkYhR0tY