Following the initial cruise missile strikes on 19 March, the Pentagon released a document illustrating the general areas where targets were attacked. As expected for an attack on Libyan IADS architecture, the strike locations corresponded to regions with deployed EW assets and S-75, S-125, and S-200 missile batteries.

The graphic below illustrates the post-strike state of the Libyan IADS, presuming that all SAM systems were disabled in regions targeted by cruise missile strikes. 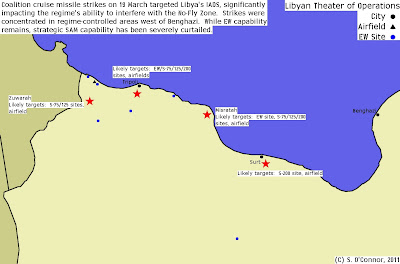 While the Qaddafi regime is no longer assessed to control operational strategic SAM batteries in the NFZ region, numerous EW facilities still remain. These facilities allow the regime to maintain a degree of situational awareness, provided they are not under constant electronic attack. Furthermore, no effort was made to strike S-75 or S-125 batteries deep inland. Sabha is still defended by an S-75 and S-125 battery, and contains a garrison facility which could be used to reconstitute SAM units damaged or destroyed in the March 19th attacks.

If the coalition is unwilling to strike targets outside the established NFZ, the Qaddafi regime may be able to transport SAM components to its periphery. This would theoretically enable targets operating in the southern portions of the NFZ to be engaged, creating an interesting scenario where the coalition would have to either restrict flight in sections of the NFZ or attack targets outside of the NFZ to maintain its integrity. Such a course of action could potentially see increased protest from nations such as China and India, bringing into question the continued value and effectiveness of the NFZ as a whole. Also, Western nations attacking targets outside of the NFZ could result in a significant loss of support from the Arab League.

If there is a lesson to be learned from the March 19th decapitation strikes on Qaddafi's IADS, it is that nations relying on Soviet-era SAM systems no longer pose a significant threat to a modern, well-equipped military arm. While current-generation Russian-made SAM systems rank among the most sophisticated and capable in the world, the era in which nations could rely on elderly Soviet-era systems such as the S-75 or S-200 to provide a credible degree of air defense capability has decisively ended. Claims by the Pentagon that Libya possessed a high-threat IADS network were technologically unfounded, in much the same way that the same claims made about iraq in 1991 were also proven to be extreme exaggerations.
Posted by Sean O'Connor at 22:58

Nice Analysis of Lybian situation, and possible the possible obtion to salvage the few remaining systems...

Though the question remains in how far 'the coalition' would care about targets out of the NFZ. After all as I see it 'acceptable' attacks in creating an NFZ wouldn't include attacks on armored vehicles and 'Lybian Government' ground forces.

It's interesting, though, to see the air operations develop just as could be expected from your original SAM site overview; read: No problems to annihilate a 'legacy' SAM Network.
What would also be interesting, is how any tactical systems could be used for 'surprise', a little like in Serbia in 1999.

Under UNSC 1973 (2011), the NFZ covers the entire country ("all flights in the airspace of the Libyan Arab Jamahiriya"). For practical reasons the coalition might not wish to actively maintain it outside the northern areas where 90% of the population is located, but I don't see any political problems with striking targets further south.

TACSAMs probably aren't a major problem. If coalition aircraft stay at higher altitudes, they will be out of most of their engagement envelopes.

Attacks on ground targets are within the scope of the UNSCR calling for operations to protect civillians. There was more to the UNSCR than simply enacting a NFZ.

In this case cruise missiles are game changers. Without US (and some UK) cruise missiles it is almost certain the obsolete systems would pose a much higher risk to their aircrafts,

Besides the number of aircraft that can support operations in Libya is very much limited at the moment.

Many thanks for this update.
It remains unclear whether Libyan loyalists are saving some long-range target acquisition and guided ground-to-air assets such as S 200.
What is certain though, is that the downed F-15E with a top-down punctured upper left side suffered more than a "mechanical failure".

I'm not sure about the F-15E. There does not appear to be any visual evidence of a SAM warhead detonation. Looks like the jet hit the ground in a flat spin and caught on fire to me.

F-15E follow-up: The official word it is malfunction, keep in mind that the same was reported for F-16 in Serbia in 1999.

Pay attention on dialog after the aircraft is hit and pilot loses HUD data. The aircraft has continued to glide.

Also during the same conflict one of the Serbian Mig-29 was shot down in Bosnia. The aircraft was "splashed" in the same way is F-15E, except it did not catch fire.

The intersting detail is the fact that the AMRAAM was still on the wing when it did hit the ground.

SA-24 is the 9M342 Igla-S. It's a MANPADS, and therefore a possibility given that it's relatively easy to conceal for delivery.

Regarding the F-15E and Mig-29 in bosnia. I found the image, it did cauth a fire:

It seems my memory is not that good any more... ;)

For practical reasons the coalition might not wish to actively maintain it outside the northern areas where 90% of the population is located, but I don't see any political problems with striking targets further south.