The SAM garrison at Ulan-Ude is a significant military facility located in Russia's Siberian Military Zone. It represents one of the largest SAM garrisons inside of Russia, containing enough equipment to thoroughly modernize any lesser nation's air defense network.

The Ulan-Ude SAM garrison, sited roughly 28 kilometers ENE of Ulan-Ude, is an expansive facility composed of three main areas. Apart from the actual garrison and storage facility, there is an administrative and support area and a weapons storage area (WSA).

The general layout of the facility can be seen in the image below: 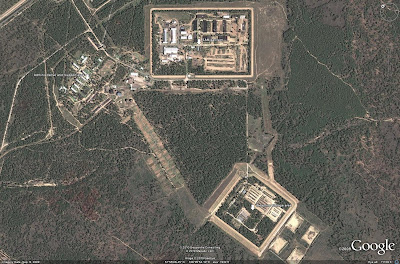 Various items of infrastructure can be identified at the Ulan-Ude SAM garrison. Power to the facility comes from external sources fed into the facility's substation by overland power lines. From the substation, power to the garrison itself is provided by a partially buried conduit. A POL storage facility is located south of the administrative and support complex, providing fuel for the garrison's vehicles as well as maintenance, security, and transportation vehicles serving the entire facility. While a network of minor paved and unpaved roads connect the complex with the outside world, the primary means of access is by rail. A rail transfer point for onloading and offloading equipment located adjacent to the garrison complex. A maneuver area is also located adjacent to the garrison complex, where wheeled and tracked vehicles can be put through their paces before dispersal to active units to pre-emptively identify any maintenance concerns.

The local infrastructure of the Ulan-Ude SAM garrison can be seen in the image below: 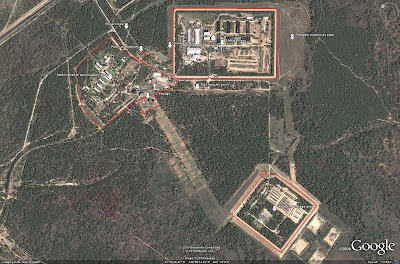 Regionally, there are numerous facilities which may serve to support the complex. 5 kilometers to the northwest, a power substation has been identified near the town of Onokhoy. This substation serves as the regional substation serving the SAM garrison. The garrison's power substation uses overland lines which lead directly to the Onokhoy substation. 6.5 kilometers to the west is a major rail transfer point. Equipment and cargo moved to and from the garrison complex travels down a dedicated rail spur which merges with the main line 2 kilometers east of the rail transfer point. Equipment being dispersed would travel down the rail spur, reach the rail transfer point, and likely either 1) continue along the main line, 2) be held for transfer to a different line, or 3) be offloaded and moved by road to an airfield in Ulan-Ude for airlift. Further to the southwest, at a distance of 9.5 kilometers from the main garrison complex, is a large POL storage facility. This facility could serve as the main holding area for POL in the region, with fuel being transferred by rail to the garrison when required to refill the complex's relatively minor capacity.

The regional infrastructure servicing the Ulan-Ude SAM garrison can be seen in the image below: 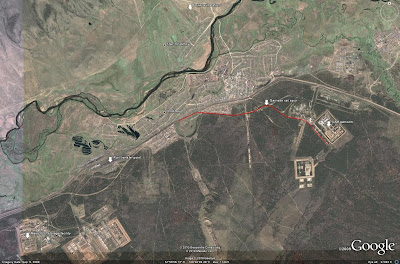 The Ulan-Ude SAM garrison itself is a 530,000 square meter complex with numerous facilities designed to service, maintain, and disperse SAM equipment to operational units. The primary systems held at the facility are members of the S-300P series.

Apart from the holding areas and sheds, major identified locations include an equipment checkout pad, for verifying the operational status of equipment held at the facility before dispersal or during periodic maintenance, and a probable radar storage facility. The radar storage facility is the likely holding point for 64N6 (BIG BIRD) EW radar systems, as these systems have not been identified in open storage. The high-bay garage has an entrance at the northwest end of the building which has enough exterior clearance for a large vehicle such as the 64N6 transporter to maneuver out of the building and into the complex. No other buildings appear to have the necessary exterior clearance, suggesting that 64N6 components must be held in this facility.

Enough equipment for roughly fifteen S-300P series batteries can be seen in open storage at the facility. There are 68 5P85-1 TELs and 2 5N63 (FLAP LID A) radars associated with the S-300PT (SA-10A GRUMBLE), and 56 5P85S/D TELs and 9 5N63S (FLAP LID B) radars associated with the S-300PS (SA-10B GRUMBLE). Additionally, one 64N6 radar set and 9 40V6 mast assemblies can also be identified. SAM equipment is typically organized by battery, with the components for a complete battery being held in the same area. Apart from the S-300P series components, components for at least 4 S-125 (SA-3 GOA) batteries are also held at the facility, as well as numerous tactical SAM components.

The quantity of components held at the garrison is indicative of Russia's peacetime air defense posture. There are numerous inactive SAM sites in the nation, leading many casual observers to note that the network appears to be a shell of its former Cold War era self. This is not entirely accurate; the Russians have simply garrisoned a significant number of units, holding them in reserve until required. The equipment held at the Ulan-Ude garrison alone would be enough to significantly increase the effectiveness of any regional network. By holding these units in garrison, operating expenses can be saved while retaining the capability for future exploitation when required.

Identified areas and SAM components at the garrison complex can be seen in the image below. For the SAM components, which are identified by colored dots, the following color scheme has been used: S-300PT TELs are purple, S-300PS TELs are red, 5N63 radars are orange, 5N63S radars are yellow, 64N6 radars are blue, and 40V6 masts are green. 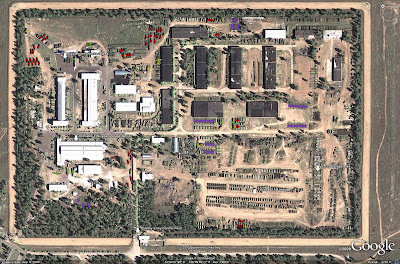 The garrison complex has numerous identifiable security measures to protect its holdings. The facility is entered using a primary entry control point which leads directly to the rail transfer point servicing the complex. A secondary entry control point likely serves as the entry for personnel and service vehicles. The complex is surrounded by a double fenceline, with an 18 meter dirt strip having been cleared between the fencelines. The exterior fenceline has lightposts placed every 32 to 35 meters, and four guard towers are situated at the corners of the fenceline in the dirt strip.

Security measures at the Ulan-Ude SAM garrison complex can be seen in the image below: 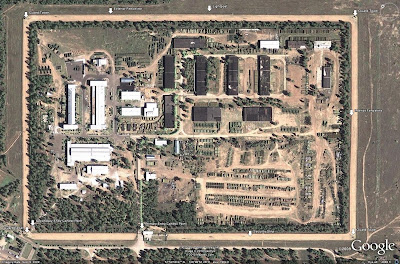 Located south of the main garrison is the weapons storage area for the complex. This facility serves as the primary holding area for the actual missiles to be employed by SAM systems held at the complex. Holding the weapons in a separate secure facility negates the possibility of a catastrophic explosion or fire damaging the SAM components. The WSA is accessed by a single road leading to an entry control point. Security is similar to that of the actual garrison complex, with a double fenceline separated by a defoliated dirt strip, various guard towers and lighposts surrounding the compound. The interior of the compound possesses numerous revetted holding areas, some of which contain storage buildings, others serving as open air holding pens.

Details of the Ulan-Ude WSA can be seen in the image below: 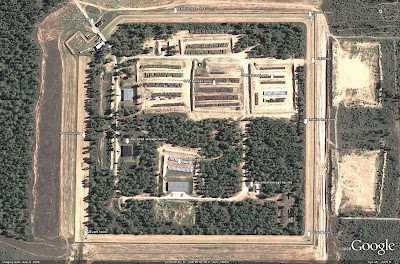 The following image depicts the likely steps for equipment to be dispersed from the garrison. First, equipment would be removed from holding areas and sent to the checkout pad. There, the equipment is spun up to determine its operational status. At this point minor maintenance would likely be conducted if required, and if enough discrepancies are noted it is likely that a different set of components would be removed from storage. Lastly, the components would be sent to the rail transfer point for transport. 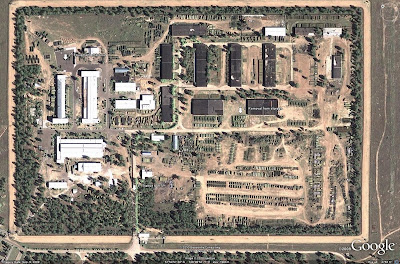 The critical nodes for the Ulan-Ude SAM garrison are the main garrison complex and the rail transfer point. Eliminating the garrison complex itself removes the potential threat psoed by the garrisoned components, while eliminating the rail transfer point would make dispersal a far more time-consuming and tedious process. The WSA is not necessarily a critical node as there are sufficient holdings of missile rounds throughout the region and the nation to make up for any loss. Similarly, the power substation is not a critical node as its destruction would not cause any appreciable loss of ability to disperse equipment. The portable generators possessed by each individual battery could be used to power components for checkout.

The following intelligence gaps exist in the analysis of the Ulan-Ude SAM garrison complex:

1. The power station servicing the complex through the Onokhoy substation has not been identified.

2. Communications systems and facilities serving the complex have not been identified.

3. The source of potable water for the facility has not been identified.

Very interesting analysis. As far as I see it a very good start for your new schedule.
Especially the final assessment is good to notice and very well shows what all is necessary to in depth understand the workings of a 'foreign' SAM Garrision (or military facility in general).

Funny thing is that the last two bits were added at the very end of the process. I was trying to think of what else might be relevant as analysis without turning it into a big speil on "and here's how we'd fly in and bomb the site". If I was writing this up professionally, those were the things I figured were missing from what I already covered, so I stuck 'em in there.

"3. The source of potable water for the facility has not been identified."

I don't see how could this be of any interest, since cutting the water supply won't have an immediate efect on the combat/deployment capabilities of the garrison.

The water source should be the same as for the nearby town, but supplied trough a totally independent conduit.

In this example, water is of interest purely as an infrastructure element.