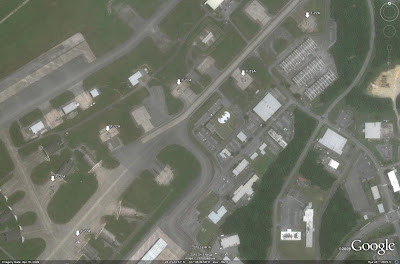 What is the white thing that looks like a giant silhouette of the Bat Plane on top of the building to the upper right of the Raptors?

I dig the Batman emblem!

I dug around a bit and found out that the 44th fighter squadron is based there and it's name is "The Bats"; also the Navy has a P-3 Orion squadron there ("The World Watchers") that incorporates a bat into its shoulder patch design:
http://2.bp.blogspot.com/_1Y1-JUE_bcI/TLm89NUKymI/AAAAAAAABhc/HL3IBgvQ_qE/s1600/Vq1kadena.jpg
The things on the bat's chest look like satellite orbits, so maybe they have some sort of reconsat downlink base there also, and the building is the Bat Cave where they look over the goodies the planes and satellites dig up.